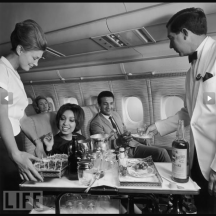 Wednesday night was date night for my husband and I, just a relaxing dinner for two.  We planned to make it an early night (since I had a cold) but didn’t want to get home before the kids were in bed (sorry sweeties…we love you but mommies and daddies sometimes need a little break).  So, we stopped at the drug store to pick up a couple of things, where we spotted the SoloHealth Station and, being in no rush to get home, decided to give it a whirl.

Ok, I confess we were a bit like kids playing around with the old-school “love testers” at the fairgrounds.  “My turn, my turn! Yeah, take that test too! Giggle, giggle.”

Turns out my husband could stand to work on improving his sleep patterns, but me? I passed all the tests with flying colors, including BMI, Blood pressure, Sleep Assessment, and a Health Risk Screening. 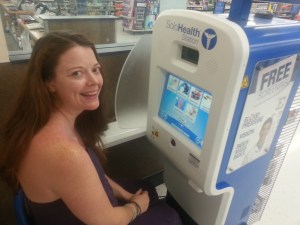 I’m not the most photogenic person. My husband is forever laughing and calling me out for “talking” during the picture.

However, last night I definitely wasn’t’ the shining example of health portrayed by my friend, the trusty SoloHealth Station. Last night I was low, low, low.  Don’t you wish there was an easy or obvious answer for every bout of irregular blood sugar readings?  I may feel guilty when I miscalculate my carb intake and end up high or low…but at least I know why!  I find it infinitely more frustrating to be left guessing…or to have irregular blood sugars for some other reason that I have no control over, like an illness.  While I do have a pretty wicked head cold right now, I’ve already had it for about 5 days and usually being sick raises my sugars instead of lowering them.  Last night my CGM woke me at least 4 or 5 times!  A couple of those times I was only a little low, so I just popped a single tab or two and fell back asleep (thinking the issue would be over).  Only to be woken again, and again, and again.  Finally I was woken in the 40s and upon dragging myself out of bed I realized that my menstrual flow had gone haywire in the night and was extremely heavy.  Huh? Now I’m sick, having hard-to-ditch low blood sugar in the middle of the night, and a heinous menstrual cycle?!  Is this the Universe’s cocked-up way of letting me know it’s Friday the 13th?  Not funny Universe…not funny. 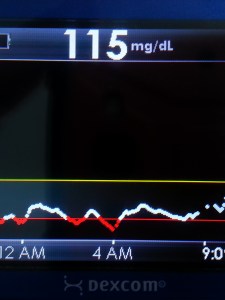 As bad as it is, I’m thankful for my CGM and the peace of mind it provides in situations like this.  What could have happened if I didn’t have it?  After all, I was pretty zonked out on cold medicine.  This isn’t the first time since having my second child and going back on HRT 6 months ago that I’ve had a crazy girl cycle.  Guess it’s time to bite the bullet and go to see the Dr again just to be on the safe side and make sure I’m not missing anything (short of the Universe’s evil Friday the 13th plan, of course).  But, it’s also definitely one of those mornings where I wish I could just catch a break.  I wish I could just be an average Joe, someone who could actually use the SoloHealth Station (with it’s simple metrics and variables) to get a realistic snapshot of my health.  Sigh…

Today on my lunch hour I headed home and loaded up my 6-year old daughter in the car to take her to her first day of lego summer camp (fun!).  Normally I would have checked my BG before driving at lunchtime but I’ve gotten kind of reliant on my CGM and it said I was fine at 87, so I didn’t bother with a finger prick.  We’re half way there and I start to feel just a little funny, so when we hit a stop sign I whip out my kit just to be sure…53.  Grr! Thanks for nothing CGM!

I suppose the appropriate thing to do would be to pull over, tab-up, and wait for my BG to rise.  What actually happens is this: 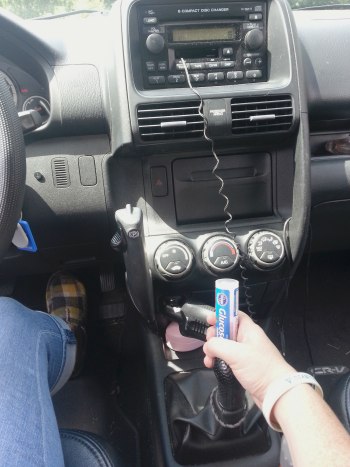 That’s an open container of glucose tabs I’m holding while also shifting gears (no, I didn’t actually take the pic while I was still driving…I’m not crazy!).

Why did I drive-while-tabbing instead of pulling over?

Because in my world a BG of 53 (being treated) isn’t terrifying or dangerous.  In my world it’s just another, albeit wearisome, inconvenience.  In my world you don’t pull over (literally or metaphorically) for the big D unless you really have to….you just don’t.

Instead you adapt, and learn to overcome new challenges.  Dealing with D becomes part of life and you figure out how to get the job done anyway.  For me, popping a few tabs in the car occasionally, while not ideal, has become equivalent to opening a box of crackers for my kid while driving or feeling around on the floor of the car for the baby’s pacifier while driving (you know we’ve all done that one!).

You adjust to how your life is different.  Like when you have kids and your life changes.  It’s still “your life” but now it’s also “your life with kids” and this change brings with it lots of wonderful and not-so-wonderful moments.