It’s official.  I quit nursing my son after 13 months.  Part of me wants to celebrate that my body is once again all mine and I have a little more freedom.  Part of me is a bit sad because I won’t be having any more children, so this was my last time to experience that special baby-mommy nursing bond.

What does the diabetic part of me think?

Well, research shows T1 mothers are less likely to long-term breastfeed successfully.  You read a lot of quotes in scientific journals like this: 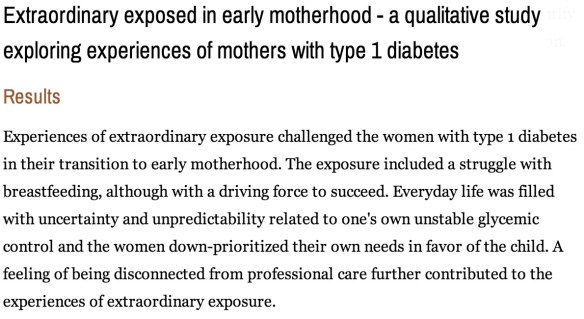 Click on the image to go to the full article on PubMed.

I’m sure this isn’t a huge surprise to any of us, as most hard things in life are a bit harder with T1 along for the ride.  Nevertheless, I’m proud that I lasted this long (despite the fact that I’m guilty of “down-prioritizing my own needs”).

Research also shows that a longer duration of breastfeeding might help protect my children from potentially developing T1 themselves.   So, I’m proud for that reason as well. I really like to think that despite my broken immune system, I was still able to pass on to my little guy what he needed for his tiny immune system to grow big and strong (hopefully strong enough to know not to attack parts of his own little body!).

I’m also nervous.  I’ve been telling myself that when I finished nursing I would get back on the trail to emphasizing my own health, which means letting my body adjust to the hormone changes that come with quitting (and premature menopause) and then figuring out where my insulin requirements really stand now.  This is daunting.  So much has changed!  I weigh more.  My activity levels are different.  My schedule is more erratic.  I eat a little differently.  I was never afraid of a new variable before.  I watched my BG patterns and I made adjustments as needed.  But this?  This is a LOT of variables that have changed at once.  I almost feel like I’m starting from scratch.  Then again, I knew it was coming, so the jig is up.  I’m on my own once more with no excuses and it’s time to work on stabilizing my BG patterns.

TI diabetes, Grave’s disease, then early menopause….Geeezzz, what’s next?  Apparently, it’s not only pretty common for people with an autoimmune disorder to develop a second autoimmune disorder but also for women with T1 to have early menopause (or premature ovarian failure-POF).  Like my autoimmune disorders, I developed POF suddenly and acutely.  I was only 35 years old.  Without estrogen, my blood sugars skyrocketed and I was advised by multiple Drs to start hormone replacement therapy (HRT), and stay on it until I was 50 or 55.

I’m the kind of person that doesn’t believe a pill will solve all my problems (I wish!) and sometimes that we, as a culture looking for a quick fix, tend to take medications we don’t really need without considering long-term side effects.

I researched painstakingly to find the most bioequivalent (not the most convenient) versions of HRT available, settling on the Vivelle dot skin patch for estrogen coupled with cyclic Progesterone in the form of Prometrium…and (drum role please) they worked!  My blood sugars and insulin requirements went back to normal, I lost weight, and generally felt great!  Until 3 years later when I got pregnant…WHAT?!

So, despite my acute POF, my non-existent FSH (follicle stimulating hormone), and crazy-high LH (luteinizing hormone), miracles do happen.  Now, about a year after my healthy, happy son was born, both my hormones and my blood sugars are a bit choppy.  In the past, I used my consistent blood sugars as a barometer to determine what dose of hormones I needed to be on to get back to my pre-menopausal self.   But, since the pregnancy my blood sugars aren’t the shining example of regularity they once were, so this time I’m attempting to adjust the hormones first and then concentrate on the insulin requirements.  I suppose it’s a bit of a “Which came first, the chicken or the egg?” situation.

I’m currently on the same dosages of Vivelle and Prometrium that I was on pre-pregnancy, however what used to work so well for me….just isn’t working at all now! (Don’t worry I’ll save you the gruesome girly details).  The only difference in the HRT is that my insurance Co. started opting for a generic version of Prometrium and I’ve been on that since Feb.  My first step in getting the HRT right is to switch back to the Brand version and see if it makes a difference.  Here’s to hoping that it works and frees me up to move on to adjusting my insulin dosages!