Remember when you didn’t know what MDIs, CGMs and insulin pumps were?  When you might have thought glucose was some hardware store product like Gorilla Glue and you could care less about counting carbs?

I do.  I recall being extremely health conscious about exercise and eating natural ingredients but not having a clue that an apple had carbs.  I thought carbs were just stuff like pastas and bread.  I didn’t need to know…and I was perfectly happy not knowing.  Then I got diagnosed and was submerged in a new culture with it’s own language, where I either learned the language…or perished (probably literally).

Learning diabetes lingo is like an initiation into the world of diabetes and speaking it can be like a secret handshake.  The other day I received a random customer service phone call from my Internet hosting company.  They needed to know some account information and I was asked to tell them one of my domain names.

“Cool name” said the man on the other end of the line.

“Thanks,” I said feeling a little strange and wondering if the word “diabetic” made him uncomfortable or something. 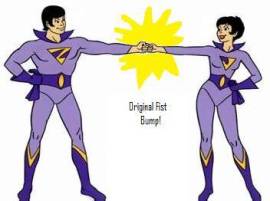 “Me too.”  And it was like we both automatically knew that we were members of the same secret clubhouse and started talking D-talk like old pals.  By the time we got off the phone, I knew his A1C, his age, how long he’d been a diabetic, when his next endo appointment was, and that he was planning on getting an insulin pump soon.  I even knew his biggest insulin pump reservation (and fear) was that it would accidentally give him an unwanted bolus…and we all know how dangerous that could be!  Funny thing though, I never even caught his name.

I imagine there are lots of diabetics that know other diabetics and talk the language regularly but then there are also people like me (and probably my Internet host provider friend) who rarely personally encounter anyone else with diabetes.  When it does happen, it’s a smack on the back of the head saying “Hey, there are other people who speak the language!”  Followed by a relief of sorts…a pleasant comfortable reminder that if I want to speak my strange and foreign tongue, I know I can find people to talk to.

Anyway, to the very nice Internet hosting provider representative I spoke with, I wish you luck in finding the insulin pump that is right for you…

One thought on “Diabetes Lingo: The Secret Handshake”